LUNCH IS SERVED::  20g of cheese balanced on top of a raw potato, followed by a tin of tomatoes, garnished with a microscopic segment of carrot. 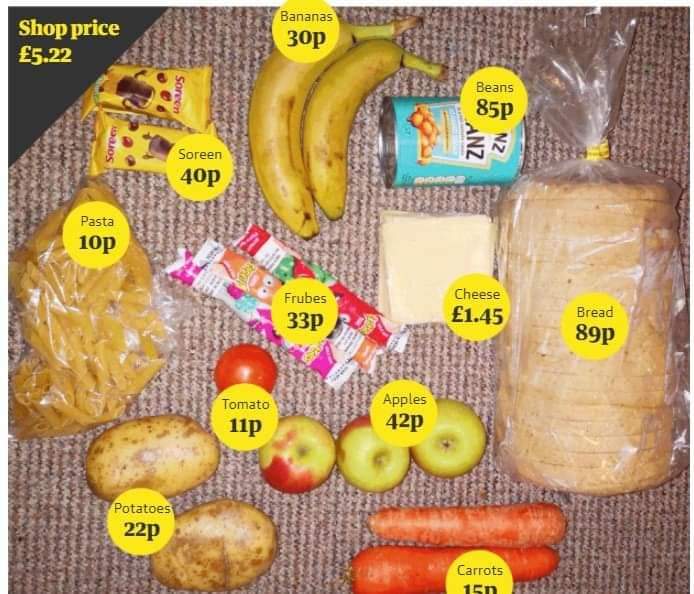 When a photograph of a small quantity of random, incompatible and not very fresh looking food items appeared on Twitter; Chartwell UK, the FTSE 100 company who provided the sorry offering tried to dismiss their failing as unrepresentative of their usual high quality.

Indeed this is true: photographs on twitter from the “Chartwells Independent” account depict beautifully prepared and fresh food for the privately educated children of wealthy parents; some of whom pay up to £40,000 each year to tutor their offspring.

This stands in marked, and shameful contrast to the squalid photographs uploaded by parents of children eligible for free school meals of food that is supposed to equate to ten school lunches: but in reality, amounts to ingredients that, as one twitter user said, might be found at the back of the kitchen cupboard at the end of the month.

Chartwell UK is part of Compass Group plc. Their chairperson, up until December last year was Paul Walsh, a Tory Party donor and adviser to former Tory Prime Minister, David Cameron. The private contractor has been awarded Tory Government contracts worth almost £350M since the start of 2016.

Chartwells claim on their Twitter account to be “Nurishing young bodies and minds with exceptional food and learning,” but
the cheap items that they are actually providing have been found to be anything but “exceptional.”

Photographs online of so called “hampers” consisting of pasta, but no pasta sauce, bread but no margarine for sandwiches and a meagre 20g daily allowance of cheese, reveal the inadequate truth of what is being presented to our vulnerable children.

The profit-focussed-contractor’s 10 day “hamper” includes raw baking potatoes for 8 days out of 10. Such a high quantity of potatoes is unhealthy as it does not constitute a balanced or varied diet. This suggests that Chartwells are simply bulk-buying for minimum quality and maximum profit.

In their defence, the firm cited “packing and distribution costs” as a concern, leading many to call on the Government to issue food vouchers or direct payments instead so parents can buy food for their children. This is a sensible suggestion that would remove packing, distribution – and indeed profit from the equation.

Chartwells also publicly stated that
“In our efforts to provide thousands of food parcels a week at extremely short notice, we are very sorry the quantity has fallen short in this instance.”

However, they bid for this work and accepted their payment without any such complaint. Their gripe about short notice is therefore contemptable; as is their suggestion that the initial photograph that was uploaded by an anonymous twitter user is untypical of what they provide: reports online, many with accompanying photographic evidence to the contrary, are rife.

This highlights a systemic, callous failure at the heart of Chartwell’s operation.

Labour’s Claudia Webbe, the MP for Leicester East asked, “is nothing spared from their greed? Not even child hunger?” while Richard Burgon MP declared that “hunger is being used as a financial opportunity.”

Reading District Labour Party demands the removal of grasping, profit hungry private corporations and calls for parents or guardians of children eligible for free school meals to be provided with direct state aid in the form of food vouchers or payments.