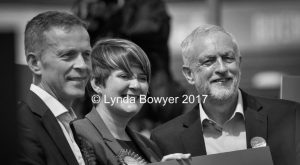 Labour leader, Jeremy Corbyn, spoke to around 1,000 people at Rivermead Leisure Centre, offering a better future for our community under Labour and warning of the damage another Conservative Government would do to the NHS, schools and other public services.

Jeremy Corbyn highlighted Labour’s commitments to invest in the NHS and care for the elderly, to scrap tuition fees and to reverse cuts to schools.

He also specifically mentioned the campaign to save Chiltern Edge School and he said a Labour Government would stand up for schools like Chiltern Edge which were under threat of closure from Conservative-led councils like Oxfordshire.

The visit attracted the national media and it was the lead item on the lunchtime TV news and was reported in the national press.

Matt said: “Jeremy’s visit lifted both local campaigns and we are very grateful for his support. It was great to meet him and him and his speech inspired local members and supporters.”