Well what an amazing few days we have just witnessed.  I’m happy to admit I went into the general election thinking Labour would hold its own.  I wasn’t expecting the huge losses predicted at the start of the campaign but equally I wasn’t expecting another 30 new Labour MPs, one of whom is the new MP for Reading East Matt Rodda! Jeremy Corbyn had had an excellent campaign and when I read our manifesto my heart soared – it was excellent.  Filled with hope for a fairer future.  I was a steward at the rally he held in Reading and the turnout was amazing and so encouraging. 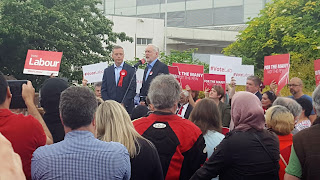 On election day I was running the Battle ward committee rooms, which something I’ve done for many years.  I was entering the gate data we had (the info we get when people at the gate of polling stations ask for your polling card number).  This shows us how many of our promise had voted.  It was clear something was very different from the beginning.  I was receiving a lot more data to input than is usual. By the end of the day I had huge piles of gate slips and an achy right hand!

By 10pm I was tired and looking forward to some sleep but the exit poll put any ideas of a peaceful evening to one side so I headed off to the count.  The voting samples I took looked excellent in Battle and pretty good even in some of the West Berkshire wards.  As the results came in from across the country it was apparent the exit polls were pretty accurate.  This meant we were in with a real chance of winning the two Reading seats.

At 3.30am the Reading West results were announced.  We didn’t win but we did reduce Alok Sharma’s majority to 2876. Around 4am a real buzz was being felt and rumours flew we had won Reading East.  The candidates were told the result and headed to the stage for the announcement.  It was amazing.  Matt Rodda had not only won the Reading East seat but did so comfortably with a 3759 lead. 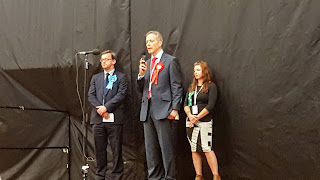 It’s now clear Reading West is a winnable seat and I will do all I can to ensure the the next time we have a general election (some saying it could be the autumn!) we return Reading West to Labour.

Posted in GE17, Latest Posts and tagged Matt Rodda
← LABOUR POLICIES SHOULD WIN THROUGHWest Reading Great Get Together – Picnic In The Park! →