I’ve just seen the budget.  I’m not sure what I was expecting – certainly not an end to austerity, despite it being clear it’s failed.  I was hoping to see the government had listened and understood that living standards are being squeezed and people are struggling. I was wrong.

Forecasts for growth have been down graded from 2% to 1.5%. Pay continues to stagnate and public sector workers still face a pay cap. People are struggling to make ends meet and the budget has done little to lighten their load.  Food bank use continues to grow with ReadiFood delivering 135 parcels a week.  Food prices are rising as are energy costs, rents and house prices.

Stamp duty is being scrapped for first time buyers purchasing properties up to £300,000.  That’s all very well but you have to be able to afford to buy the house first, have the salary to back up a mortgage plus be able to save a deposit. According to RightMove the average terraced property sold for £314,479.  Property ownership is now out of reach for many and rents, on average £1,079 for a two bed property in Reading, are also becoming unaffordable.

We face another winter where people will be faced with the choice of eating or heating.  This is nothing new, the government have not been taken by surprise.

Some money has been thrown at the NHS.  There’s £350m to address pressures in winter 2017/2018 but that won’t go far when you take into account how far it’s to be spread and additional pressures caused by cuts to council social care budgets and a GP service stretched to the limit.

Schools gets nothing extra in their budgets.  There is money available for secondary schools and collages for pupils taking maths at higher levels but nothing for the primary schools who have already resorted to asking parents for money to plug their budget gaps. The government really is just papering over the already deep cracks they have created.

The future really does look bleak under the Conservative government.  After 7 1/2 years of austerity it’s still very much pain with little gain for the average family.

We need a change of government if we really want to see living standards improve, properly affordable housing, a well funded NHS and school budgets that provide a good quality and varied education for our children.

We need a Labour MP in Reading West who stands up for every community, regardless of its prosperity. 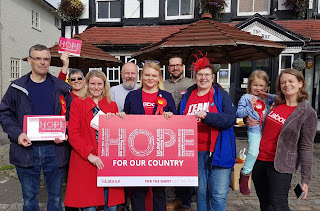 What would Labour do instead?  Find out here: Manifesto

Posted in Opinion, Reading News
← A Let Down BudgetHammond’s crumbs from the table →